Drupal 9 is Released – Prepare Your Website for Drupal 9 Migration! A Guide to Compare Drupal 7, Drupal 8 & Drupal 9!

Drupal 9 has been released

Drupal 9 has been released and it is the easiest upgrade ever. We’d love to share our learnings with the Drupal community.

What are the new features of Drupal 9?

Drupal 9.0 will have the same features as the final minor release of Drupal 8 (other than those provided by updated dependencies). Similar to Drupal 8, Drupal 9.1, 9.2, etc. will add new backwards-compatible features to Drupal 9 every six months after Drupal 9.0. The key benefit of Drupal 9 over Drupal 8 is the platform will be supported with security fixes after November 2022. The standout feature of Drupal 9 is its ability to provide as easy an upgrade as feasible from Drupal 8.

To illustrate this, imagine your website is a train. Previously, moving major versions meant moving the train to a different track entirely. Beginning with Drupal 9, new major versions will just be stations on the same track.

Drupal 9.0 will not include new features but Drupal 9.1 onwards will continue to

If you have a Drupal 8 site, you can relax as Drupal 9 will be almost exactly the same as the final minor version of Drupal 8.
The key thing to do is ensure your website is up-to-date with Drupal’s existing core and module/theme releases. Then you’ll easily be able to upgrade to the final Drupal 8 minor version when it comes out. This will be released alongside Drupal 9 and will be the same as Drupal 9, except it won’t have the updated dependencies and removal of deprecated code.
For any custom code on your website, you can also start using deprecation checking and correction tools to ensure the code is compatible with Drupal 9.
There will be community support for Drupal 8 until November 2022, so there’s plenty of time to get your website up-to-date.

Preparing a Drupal 7 site for Drupal 9 is a bit more complicated, but there’s still no need to panic.

The best thing to do is to migrate Drupal 7 to Drupal 8 as soon as possible, and incorporate deprecation checking tools into the migration process. This will make your eventual upgrade to Drupal 9 much easier, as Drupal 9 is much more similar to Drupal 8 than Drupal 7.

To migrate your site to Drupal 8, we recommend using the migrate module suite in order to re-build your site and import content effectively. The Drupal module upgrader tool is also very helpful for flagging up and converting code that requires updating.

There will be community support for Drupal 7 until November 2022, so whilst there’s plenty of time to get your website up-to-date, it’s important to start preparing for Drupal 9 now. 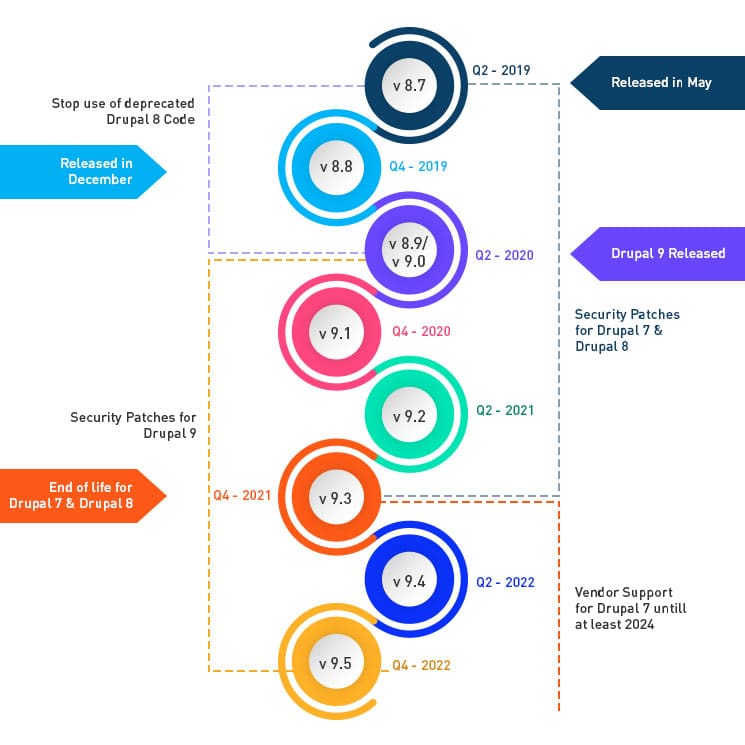 Wait, it means you will only have one year to migrate from Drupal 8 to 9?

Yes, but fortunately moving from Drupal 8 to 9 will be far easier than previous major version upgrades. The first release of Drupal 9 will be very similar to the last minor release of Drupal 8, as the primary goal of the Drupal 9.0.0 release will be to remove deprecated code and update third-party dependencies. By keeping your Drupal 8 sites up to date, you should be well prepared for Drupal 9.

Difference between Drupal 8.9 and Drupal 9.0

Drupal 8 is in the center of community’s ideas and is getting lucrative technological innovations all the time. Despite the EOL in 2021, the future looks particularly bright for D8 website owners. And here’s why.

Compared to Drupal 7, Drupal 8 is a technological breakthrough. That’s why upgrades from D7 to D8 are often lengthy (depending on the site complexity). But if you have moved to D8 from D7, that was your LAST cumbersome upgrade. No more of that from now on!

Drupal 8 websites will move to D9 quickly and smoothly. Lightning-fast upgrades will be provided for those that are using the latest Drupal 8 minor version and no deprecated APIs. This golden rule of keeping up-to-date and avoiding deprecated APIs helps even contributed and custom Drupal 8 modules be instantly compatible with Drupal 9! At Skynet Technologies, we are always ready to take care of this for you.

Difference between Drupal 7 and Drupal 8

Below is the few major difference we have listed but there are many. 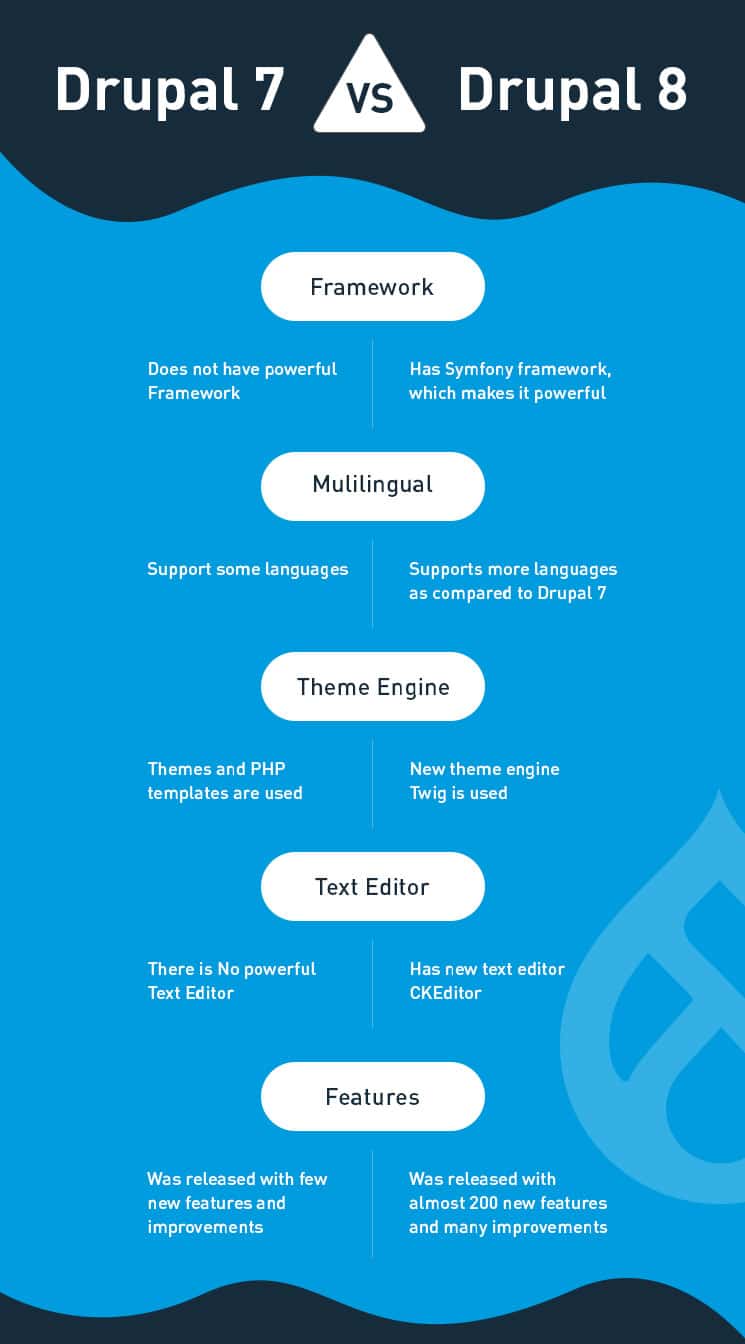 Drupal 7 Will be supported until November 2022!

When this occurs, Drupal 7 will be marked end-of-life in the update manager, which appears in the Drupal administrative interface. Updates, security fixes, and enhancements will no longer be provided by the community, but may be available on a limited basis from select commercial vendors.

If you have a site that is running on Drupal 7, now is the time to start planning the upgrade. Note that the transition from Drupal 8 to Drupal 9 will not be the significant effort that the transition from 7 to 8 was. In fact, the first release of Drupal 9 will be identical to the last release of Drupal 8, except with deprecated code removed and dependencies updated to newer versions.

The best option is to move to Drupal 8 in the nearest future. Just one upgrade will be their ticket to the future hassle-free upgrades (to Drupal 9, 10, and beyond). And, of course, they will be in line with the times and have all the Drupal 8 innovations. Our Drupal 9 migration experts are ready to smoothly move you to Drupal 8.

If you are still using Drupal 7 and are wondering what to do, you currently have two options:

Whether you want to upgrade/migrate to Drupal 9, add new features, fix a bug/problem or maximize security protection website, our team of Drupal Web Development and Drupal Website Maintenance experts can guide you as per your requirements.

Please Get in Touch or Request a Quote for more information.

If you have any questions or would like to know more about how Skynet Technologies can help your business to reach one step ahead, Reach out us through submit form & We'll get back to you soon!

Unfold new possibilities for your website with Drupal personalization!

Drupal 8 to 9 Upgrade: Prerequisites, How-to and Other Tips!

It has come to our attention that some unscrupulous organisation or persons are using the name of Skynet Technologies and making fraudulent recruitment offers and soliciting job applications. These offers are being made via email, Facebook, WhatsApp and phone calls. The offers require the job seekers / applicants to pay fees and/or deposit funds into bank accounts.

If any person receives any such unsolicited recruitment or job offer in our name, we strongly advise that you do not respond.

Under no circumstances will Skynet Technologies ever send unsolicited job offers via email, social media or phone call; we do not request any kind of payment for recruitment offers or employment; and we have not authorised anyone to either collect money on our behalf or arrive at any monetary arrangement in return for employment.

We have reported the scam to the Victorian Police and the Ohio state police and are taking the appropriate legal action against these fraudulent operators. However, please be advised that Skynet Technologies shall not in any way be held responsible or liable for any loss that may be incurred through dealings with these fraudulent operators, who are in no way affiliated with Skynet Technologies.

If you receive any unauthorised, suspicious or fraudulent offers, please email us at hello@skynetindia.info